Ubuntu MATE has a number of guiding objectives and goals.

What really is Ubuntu MATE?

If you are new to Ubuntu MATE, or only casually acquainted with Linux based distributions, it can be difficult to understand how a Linux operating system compares with other computer systems that you may already be familiar with. Hopefully this page will help demystify Ubuntu MATE for new-comers.

Ubuntu is one of, if not the, largest deployed Linux based desktop operating systems in the world. Linux is at the heart of Ubuntu and makes it possible to create secure, powerful and versatile operating systems, such as Ubuntu and Android. Android is now in the hands of billions of people around the world and it’s also powered by Linux.

Ubuntu is available in a number of different flavours, each coming with its own desktop environment. Ubuntu MATE takes the Ubuntu base operating system and adds the MATE Desktop.

Wikipedia defines a Desktop Environment as:

an implementation of the desktop metaphor made of a bundle of programs running on top of a computer operating system, which share a common graphical user interface (GUI). Desktop GUIs help the user to easily access and edit files.

The MATE Desktop is one such implementation of a desktop environment and includes a file manager which can connect you to your local and networked files, a text editor, calculator, archive manager, image viewer, document viewer, system monitor and terminal. All of which are highly customisable and managed via a control centre.

The MATE Desktop has a rich history and is the continuation of the GNOME 2 desktop, which was the default desktop environment on many Linux and Unix operating systems for over a decade. This means that MATE Desktop is tried, tested and very reliable. 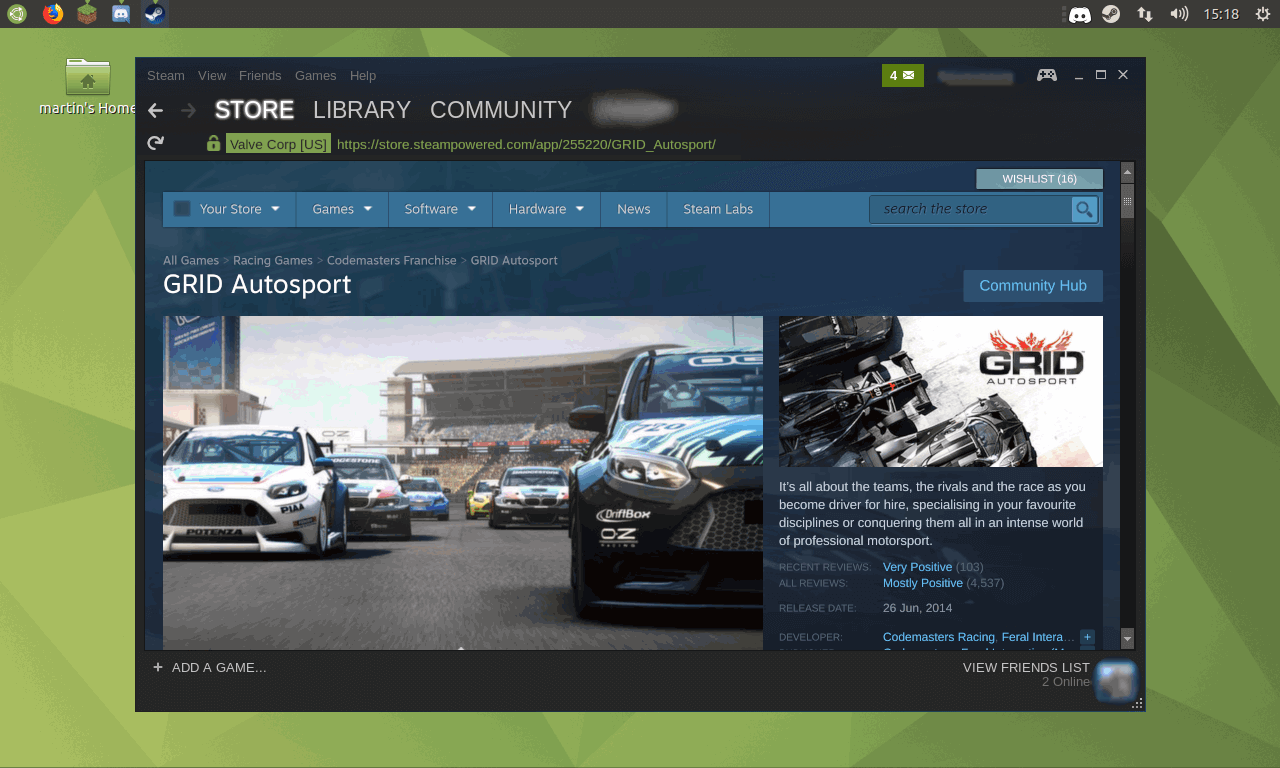 In recent years Linux has become a first class gaming platform thanks to Valve bringing the Steam platform to Linux. At the time of writing Steam has thousands of high quality indie and AAA titles available for Linux. Ubuntu MATE is fully compatible with Steam for Linux.

While Steam is a major step forward for gaming on Linux, there are also many high quality and enjoyable Open Source games titles available for Ubuntu MATE via Software Boutique and Software Centre. It doesn’t matter if you like flight simulators, motor racing, first person shooters, jump and run or card games, you’ll find something to keep you entertained.

What Linux, Ubuntu and MATE Desktop all have in common is they are Open Source. Open source software is software that can be freely used, changed, and shared (in modified or unmodified form) by anyone. In a nutshell Ubuntu MATE is free, in the truest sense of the word.

Although you will find some versions (distributions) of Linux for purchase, the vast majority are provided free of charge, like Ubuntu MATE. Open Source software is licensed in a way that allows anyone to give it away for free, no strings attached. For example, the licence gives any member of the user community the freedom to use Linux for any purpose, to distribute, modify, redistribute, or even sell the operating system. If you do modify and then redistribute Linux with your modifications, you are required by the licence to submit your modifications for possible inclusion into future versions. There is no guarantee that this will ever happen, but if you have made it better, then your changes just might be included in the next release of Ubuntu MATE.

This is how we can continually improve and grow without having to charge our users money. Many of the users of Linux are corporations that use the operating system to run their businesses, or include it within their products. Many of these corporations provide fixes and new features for Linux as they use the software for their businesses. These improvements are given back to the Linux distribution and the software improves as a result.

Unlike Windows, and macOS, Linux is not created and supported by just one company. It is supported by Intel, Red Hat, Linaro, Samsung, IBM, SUSE, Texas Instruments, Google, Canonical, Oracle, AMD, and Microsoft. Over 4,000 developers contributed to Linux over the last 15 years.

Whether you are a home user of Ubuntu MATE, a Ubuntu MATE software or application developer, or an employee of an organisation that uses the operating system, you are a member of the Linux and Open Source communities and benefit from the efforts of the developers who contribute to Ubuntu MATE and its related projects, Linux, MATE, and Ubuntu. Members of the community can and do run Linux on almost any hardware, from the prettiest MacBook to the cheapest netbook, from the newest Chromebook to some very old machines designed for Windows, and from the most powerful Internet servers to the smallest smart thermostat.

While MATE Desktop provides the essential user interfaces to control and use a computer, Ubuntu MATE adds a collection of additional applications to turn your computer into a truly powerful workstation.

This website uses cookies to improve your experience while you navigate through the website. Out of these, the cookies that are categorized as necessary are stored on your browser as they are essential for the working of basic functionalities of the website. We also use third-party cookies that help us analyze and understand how you use this website. These cookies will be stored in your browser only with your consent. You also have the option to opt-out of these cookies. But opting out of some of these cookies may affect your browsing experience.
Necessary Always Enabled
Necessary cookies are absolutely essential for the website to function properly. These cookies ensure basic functionalities and security features of the website, anonymously.
Functional
Functional cookies help to perform certain functionalities like sharing the content of the website on social media platforms, collect feedbacks, and other third-party features.
Performance
Performance cookies are used to understand and analyze the key performance indexes of the website which helps in delivering a better user experience for the visitors.
Analytics
Analytical cookies are used to understand how visitors interact with the website. These cookies help provide information on metrics the number of visitors, bounce rate, traffic source, etc.
Advertisement
Advertisement cookies are used to provide visitors with relevant ads and marketing campaigns. These cookies track visitors across websites and collect information to provide customized ads.
Others
Other uncategorized cookies are those that are being analyzed and have not been classified into a category as yet.
SAVE & ACCEPT
Close
Loading Comments...